However, only those who know them very well, can perceive the small differences, which actually make them two distinct and unique people.

There is also a unique genetic characteristic that identifies them and the difference between them: I’m talking about fingerprints!

Each of them will have well-defined needs and will relate to the world around them in a unique way.

may have different characteristics?”

The three main characteristics that identify a cap are:

The knowledge of these characteristics is fundamental to go to select the right elevator that will treat that specific cap.

On the contrary, a superficial evaluation based on appearance, can hide a wrong choice and sometimes even very problematic.

Let’s take as an example of the simple “Corona Stoppers”, those commonly used in beer bottles.

The first company to use them exclusively was Crown Cork and Seal Inc. in the late 1800s.

Their shape is circular, similar to an “inverted crown” from which the name derives.

Their internal diameter varies from 26 to 29 mm, while the height is about 6 mm.

Since 1892, the year of its patent, the crown cap has always been a simple object made of metal.

Even today this type of cap is still produced in iron, in large quantities all over the world, both for its functionality and for the economy of production.

“So… are all the Crown Caps identical to each other?”

Apparently the answer would be yes, they have the same shape, the same size, but the material is always iron?

With the evolution of technologies also the production of caps is changing in an important way and it happens more and more often that I receive requests to carry “crown” not in iron but in aluminium.

The use of aluminum instead of iron makes crown caps appear as “Gemini”, apparently identical, but in substance very different.

This means that the classic magnetic elevator, commonly chosen to treat the iron crown cap, is NO longer usable.

The magnetic elevator, as the word says, has as its main characteristic to attract all the iron caps on the conveyor belt, as does a magnet.

However, when the cap is made of aluminum or other non-ferrous materials, the magnet obviously does not attack and the elevator becomes unusable!

It could happen on an existing bottling line, to want to use a new crown cap no longer in iron but in aluminum, making it necessary to purchase a new elevator to transport them, with additional costs often not expected.

Obviously it is up to us consultants, to advise the end user on the best purchase, providing all the information in a clear and complete way, to prevent possible future problems.

It is therefore very important to accurately assess the current and future needs of the bottling line and decide whether to direct the purchase of a lift other than the “magnetic” one.

To learn more about which problems and hidden costs are hidden behind a possible wrong choice of your elevator, download HERE our FREE GUIDE:

“The 5 most frequent PROBLEMS you could have with a CAPS FEEDER”. 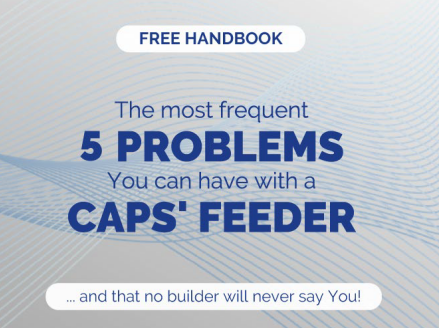 We are here to advise you, offer clarification and support.

Write to us directly and the ELEVATOREUNICO team will be ready for you!

We only ask for a few minutes, just enough time to have a coffee!

In order to continue to improve our products and services, YOUR opinion is very important to us!

We are here to advise you, offer clarification and support.

Write us directly the ELEVATOREUNICO Team will be ready for you!